Skewing art elements are sometimes used to emphasize a mood or concept. Sometimes they are just unintended surprises or freaking mistakes.

In my mermaid painting, as I began the last stages of painting, I saw the unintended surprise which took me awhile to decide whether it was wanted or if it was a freakin' mistake.

After my initial "surprise" at the oversized head and scrunched body position, I wanted to throw out my painting. But then I remembered the Medieval masters' skewed perspectives ("Why do medieval paintings often have such skewed perspectives and incorrect proportions?").

My "surprise" mermaid certainly evoked sullen emotions as she appeared pensive and stricken by grief. Such strong emotions are welcomed in art, I tried to convince myself, but they were not the emotions I had originally intended. On the other hand, I was becoming less enchanted by the stylized mermaid I selected after sketching so many artistically immature mermaid faces.

My first impression was to call this a "fail" except that I loved the mermaid tail against the rusted rice paper substrate. I decided to consider "damage control". I asked myself, 'What could I change about the upper part of the mermaid that would result in the least amount of distraction to the lower part and create no damage to the rice paper?" There were more than a few options.

When I finally struck a balance between original and altered mermaids that I could live with I transferred my final altered image over the original in preparation to paint. Fortunately acrylic paint, the chosen medium for this painting, makes the corrections slightly easier and more exacting than other mediums, but changes can be accomplished with other mediums as well.

I re-learned several lessons while working with this reconstructed painting that was started about 8 years ago.  Among them were: Don't try to make a 2 or 3 point perspective painting from a 1 point (flat-on) without careful planning before execution (of the techniques). Don't try to draw fine details with thick, soft, unsharpened lead. Never take anything for granted; always do a sample swatch on a separate similar paper before you do it on your painting.

My mermaid painting will commence when the studio cools down on Thursday and I am back home after a relaxed luncheon at a cafe rocking gently on the Columbia River with my friends.

Have you ever tossed out an imperfect piece of art? Could it have been saved by reassessing the damage and facing the challenge of keeping an open mind and making reasonable alterations? 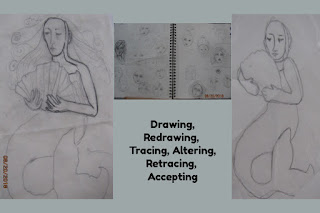