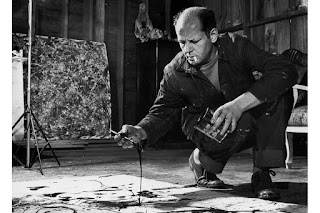 During a very "busy" vacation, I sporadically worked on the mermaid painting. With each new brush stroke, my painting took a new "turn". Finally tired of the process, I wrapped her in tracing paper and in tracing I was able to make adjustments I wanted and those I thought I "should" have.


Until last night when I happened upon the movie Pollock which chronicled the life of the painter Jackson Pollock. I could relate to the challenge of being under the control of his right brain conscious critic juxtaposed to his left brain unconscious creative expression. I was drawn in by his attempt to drown out that right side of his consciousness by self-medicating and his inner-driven external rants needed to release the creative expression and world view  that held him hostage.

I was inspired by seeing him uncomfortably pour the first drip of paint on the substrate and then the slow release of tight muscles (both physical and mental) into artistic "madness" as the paint began to dance from him - genius revealed.

I now understand where the current craze of "pours" come from. Note: he answered an interview question saying that his paintings are controlled, not hapstance, which is obvious.

During his lifetime, we did not have the knowledge of how the two sides of human brains work in conjunction with the rest of our anatomy and how "genius" could be exhibited without personal destruction. Pollock might have suffered less. Would his art have?

I resonated with his views such as:
Sadly I took his end to bed with me, watching this too late at night. During my drowsiness in my dark bedroom I viewed shades of purple rolling over and over in my visual memory like paint moving in a lava lamp. I believe these were remnants of staring earlier at purple paint chips in an attempt to move forward with my own painting. But I felt like they were related to Pollock's artistic challenges and pours.

During my inability to rest, I wanted to run out to the studio at 2 am to put back the strands of mermaid hair that I covered to make her look more "acceptable" but forced myself back into my purple doze.

Now I am here at noon with confidence that I will finish "mermaid" today, just the way my unconcious directs me without caring what criticism or critque may bring. I am grateful I do not rely on my art for income, grateful to be a cave artist, and hope that those of you who make art for a living, follow your heart rather than any perceived judgement.
Thank you, Jackson Pollock. RIP